There are seven historical cultural strata on Bulgarian territory: an unknown civilization from the fifth millennium BC, the Thracian civilization, Ancient Greece, the Roman Empire, the Byzantine Empire, the Bulgarians and the Ottoman Empire. Modern Bulgaria was born in 1878, when the five centuries of foreign rule were brought to an end by a war between czarist Russia and the Ottoman Empire. After the dramatic twentieth century, which included 45 years of communist rule (1944-1989) Bulgaria opened a new page in its history with its accession to the European Union on 1 January 2007.

Arrival at Sofia airport. Transfer to a hotel in Sofia. Introductory walk depending on flight schedule. Overnight stay in Sofia.

Sightseeing tour of Sofia. With a history that stretches over seven millennia, Sofia is one of the most ancient cities in Europe. Today it is a charming meeting point of history and present. “Ever growing never aging” is the motto of Bulgaria’s capital. It is the largest city of Bulgaria with a population of 1.3 million people. Located at the foot of Vitosha Mountain, Sofia is approximately at the center of the Balkan Peninsula. During the sightseeing tour visit to the Roman Serdika Fortifications (Sofia oldest preserved building) and the 4-the century AD St. George’s Rotunda, famous for its original structure and unique frescoes, Alexander Nevski Cathedral, Ivan Vazov National Theatre, The National Assembly, The Church of St. Sophia. Sofia is also full of delightful surprises offering a thriving and diverse street life, including open-air cafés and busy markets as well as many lovely parks and gardens to relax in. In the afternoon visit to the National Museum of History. The Museum covers almost the whole Bulgarian history, it features rich artifacts from different eras and great and exceptional historic collections. There are fantastic exhibitions of Thracian Gold and 7000 year old pottery. Visit to Boyana church (UNESCO list) – one of the greatest examples of medieval art representing an incredible advance over previous ages. The church has a long history beginning from the IX century, but the main building, small and beautiful gem like, was built by the aristocrat and powerful ruler of the region "sevastokrator" (title of the period) Kaloyan (first half of XIII c.). Overnight stay in Sofia.

Transfer to Koprivshtitsa, a town nestled amid the green slopes of the Sredna Gora Mountains, some 126 km east of Sofia. It is a lovely ensemble of half-timbered houses painted in bright colours, with wooden verandas, bay-windows, pavilions and other features typical of 19th century Bulgarian architecture. The houses have spacious rooms, richly furnished with patterned hand-woven rugs, wood-carved ceilings and cupboards, various traditional copper and ceramic vessels, and other items. After sightseeing tour of Koprivshtitsa transfer to Troyan Monastery - one of the most beautiful orthodox monasteries ever seen with a lot of spiritual signs and historical evidences. Founded in 17th century, the main church dates back to the begining of 19th century. Home of one of the icons of Three Handed Virgin Mary. After visiting the monastery drive to Veliko Tarnovo. Overnight stay in Veliko Tarnovo.

A Spiritual Tour through the Troyan Monastery 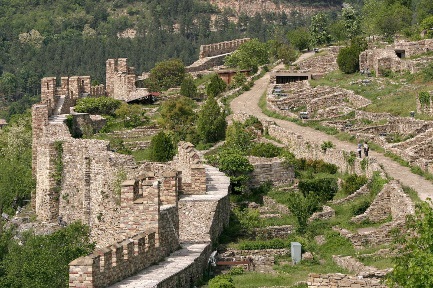 In the morning sightseeing tour of Veliko Tarnovo. The town became capital, political, administrative, religious and cultural center of the restored Bulgarian state in 1186 after two-century Byzantine rule. It has been described as “God’s preserved town”, “The Great Tarnov”, “The queen of the towns”. The tour will teleport you back in time, make you a spectator of the rise and fall of the mighty capital of the Second Bulgarian kingdom (12-14th century). By walking on the winding cobble streets, you will learn and feel how its proud population lived under the Turkish oppression, developing fabulous architectural masterpieces and established a cohesive and powerful craftsmen’s guild. The tour includes visits to Tsarevets Hill, (45 min. min. walk), Assens’ monument. Samovodskata charshia (lively craftmen’s street). In the afternoon transfer to the delightful village of Arbanassi with traditional architecture from 17-th - 18-th century. Visit to a traditional house and the church of Nativity with amazing murals depicting over 2000 Old and New Testiment scenes. Drive back to Veliko Tarnovo. Overnight stay in Veliko Tarnovo.

Drive north to Ivanovo Rock Monastery (UNESCO list). Themonastery consists of dozens of caves and niches which can be seen on the vertical rocky banks of the Russenski Lom river.Hermit monks have settled here in the 11th – 14th century. They have chosen the simple life of prayers and books over the noisy vanity of the capital city Tarnovgrad. Along with the bookmen painters also came here creating some brilliant examples of medieval paintings. Drive further north to visit Basarbovo Monastery established at the same period as Ivanovo monastery and at the moment the only active rock monastery in Bulgaria. Transfer to Russe and make a stroll through the city center. Russe has been the biggest town after the liberation from the Ottoman Empire in 1978 and the first one with European appearance. Transfer back to Veliko Tarnovo. Overnight stay in Veliko Tarnovo.

Drive south to the Balkan Mountains and visit the unique “Etara” open air crafts museum showing everyday life of people centuries ago. The atmosphere embraces the visitor and one steps back in the the 18-th – 19-th century. There are about 50 sites in the museum - craftsman’s workshops, public buildings, water technical equipment. Just like in the old days craftsmen manufacture and sell their own work directly to customers. Tourists can observe old manufacturing techniques, talk to artificers and have a look at their authentic tools and even buy a hand-made item made of leather, metal, wool, wood, clay, or fur. One of Etara’s landmarks is the water-propelled equipment used for various purposes. This extraordinary set of devices shows the Bulgarian man’s rational and technical ingenuity. Drive further inside the Balkan mountain after which the Balkan Peninsula is named. Cross the mountain at the scientific Shipka pass (1150 m). Shipka pass is particularly famous as a battle site of the Russo- Turkish war of 1877/8. A Memorial Monument to those who died in the battle has been erected here in 1934. Stop at the Shipka Memorial Church located just 12 km from the town of Kazanlak. The golden domes and the green and pink coloured facade loom against the mountains and attract the attention of the travellers. Drive further south to the Valley of the Thracian Kings. Over the past decades this region has become one of the most popular tourist destinations in Bulgaria with thousands of visitors from all over the world coming to see the numerous Thracian tombs discovered in the area. One of the most important cultural treasure is the UNESCO listed Kazanlak tomb (4th century B.C). Murals in the tomb are the best preserved artistic masterpieces of Thracian art of the early Hellenistic period depicting the life of a buried Thracian noble and his wife. Visit the tomb (copy) and continue to Plovdiv. Overnight stay in Plovdiv.

Kazanlak - Nature, History and Hospitality. You are welcome 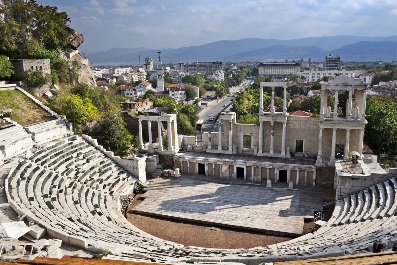 In the morning half day walking tour  of Plovidv. Plovdiv is     Bulgaria’s  second largest city and one of the  oldest in Europe, founded 8000    years ago on a par with Troy and  Mycenae. Plovdiv was the capital of  Ancient Thrace and a big trade  center in the Middle Ages. The city’s  historic quarter boasts beautifully  decorated period houses, ancient  fortress walls, a Roman forum and  stadium and magnificent churches.  During our walking tour we will also  visit the Roman theatre, the  Ethnographic Museum, and the  Church of SS Constantine and  Helena. In the afternoon transfer to  the famous Bachkovo Monastery.    Bachkovo Monastery is the second largest Bulgarian monastery. Founded in 1083 by a prominent statesman and military commander in the Byzantine service, it is one of the most important monuments of Christian architecture in the country. Although the monastery survived the first waves of Turkish invasion in Bulgarian lands, it was later looted and destroyed, but restored near the end of the 15-th century. The cathedral church of the Virgin Mary (finished in 1604) is the place where a most valuable icon of Virgin Mary, dating from 1310 is kept (brought from Georgia). On the way back we visit the nearby remarkable remains of King Ivan Assen’s fortress - a wise ruler of the Second Bulgarian Kingdom. There we find an ancient church dating from the 13th century painted with some authentic pieces of iconography as well as the stone made inscription carved by King Ivan Assen. Drive back to Plovdiv. On the way back wine tasting in a local cellar. Overnight stay in Plovdiv.

The City of Plovdiv - Its Beauty Shines from faraway 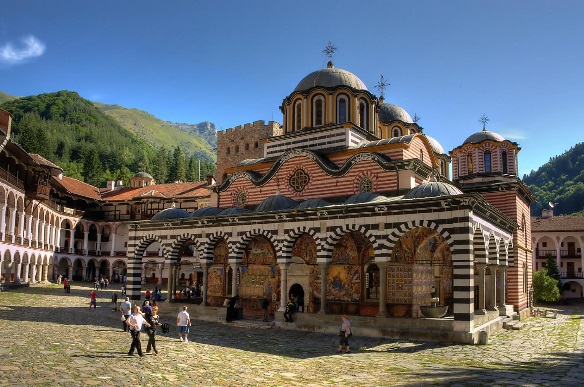 Transfer to Rila Monastery - Bulgaria’s largest and most beautiful monastery set amongst the picturesque Rila mountains. Founded in the 10th century by John of Rila (Ivan Rilski), a hermit and mystic who was canonized as a saint after his death, the monastery was destroyed and rebuilt several times in the next centuries. The exquisite architectural ensemble impresses with its size and skillful combination of stone and wood. Frescoes painted on the walls are breathtaking and the decoration of the exterior ceilings are incredibly well preserved and highly detailed. It's beauty is awe-inspiring. The monastery is ringed by mighty walls, giving it the outward appearance of a fortress. It is included in UNESCO World Heritage List. Drive to Sofia. Dinner at a typical Bulgarian restaurant with folk show. Overnight stay in Sofia.

A Piece of Heaven - the Magnificent Rila Monastery

After breakfast transfer to Sofia airport for departure flight. End of our services.